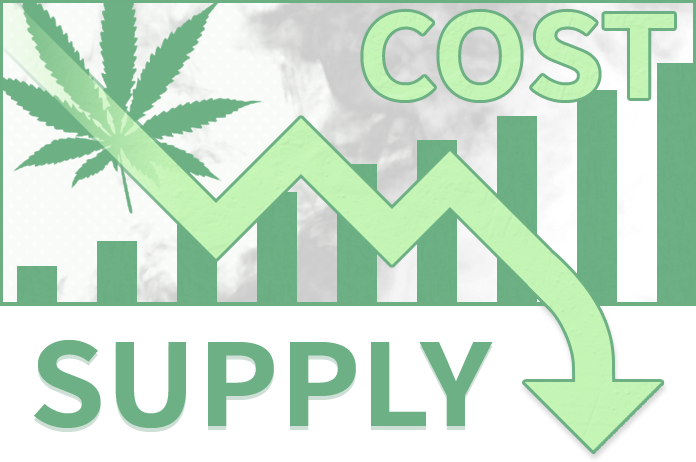 Competition and regulatory restrictions are making weed prices fall while challenges loom ahead.

We deliver the best hacks, tips and how-to’s PLUS the latest cannabis lifestyle, tech and entertainment trends directly to your inbox.

In what some have been calling ‘The Colorado Experiment’, we are nearly at the 2 year anniversary since marijuana has been legalized for recreational use in Colorado. There was of course wild speculation as to what the outcome of legalization might be, but where we are now is perhaps more surprising than even some of the most outlandish predictions.

Across the board, weed prices are dropping in the Colorado market. To be clear, it isn’t a market collapse, or a situation where prices fall because no one can sell any product. Quite the opposite in fact; sales have been increasing steadily by astronomical levels since the law went into effect January 1 2014. In a recent report, analysts found that the cost of an eighth has dropped nearly 40% while sales are only rising.

This combination of climbing sales and falling prices mean that the sheer volume of business being done by Colorado’s shops is staggering.

Competition isn’t the Only Factor

There are a number of factors contributing to falling prices, competition between a host of new dispensaries and shops being one of the most obvious. Standard market theory tells us that as the number of sellers increases in a market, prices will fall to produce a competitive selling environment. At first, there was a limited number of dispensaries poised to capitalize on the newly legalized market. This meant that access to quality product was limited, and those dispensaries were working with cultivators in the process of scaling their growing operations to meet the anticipated demand.

READ  What Cannabis Means for Your Job

Now that sellers have had a chance to build inventory and more businesses have entered the market, the artificially high weed prices are falling due to increased competition. Competition isn’t the only factor affecting the drop in prices though, there are a variety of elements at play in the still-growing cannabis market.

The distinct newness of legalization and regulation have had a serious impact on the businesses of sellers as well. Though Colorado Amendment 64 was enacted nearly two years ago, regulatory framework meant to provide structure—and political currency—to the new market impeded its ability to maintain high prices.

What this meant for growers and distributors was that in the early months of legalization, regulation hindered optimal market growth and expansion. The state of Colorado wasn’t prepared to allow the market to run wild; the entire country—and much of the developed world—is watching ‘The Colorado Experiment’. In an effort to push political frontiers while remaining as in control as possible, there were some market inefficiencies that cropped up. That being said, Colorado made almost $70 million in the first year of legalization. While that number actually fell short of some predictions, the consensus is that having an additional $70 million in the state’s treasury is better than going without it—even if there was opportunity to earn more money.

Weed Prices May Face Challenges Ahead

With sales rising and the market beginning to hit its stride, one would think that the future of legal marijuana in Colorado has the sky as it’s limit. While there is a tremendous amount of opportunity, there are still some inconsistencies that present roadblocks for the market to truly flourish.

An archaic federal law is creating financial hardship for the burgeoning market just as sellers should be reinvesting their profit. Enacted in the 1980s, a portion of the tax code specifically prohibits businesses that sell controlled substances from claiming normal business deductions. And that’s a huge problem. This means that true growth within the market has been stunted as dispensaries and shops have accumulated huge tax liabilities through the inability to claim deductions on normal business expenses.

As a result, expenses such as utilities, rent, leases, and payroll are not accounted for when business taxes are assessed against these retailers and growers. Some businesses have seen the bulk of their profits going right back to the government in the form of taxes levied on expenses, a condition that cannot persist if the market will see true growth to its immense potential.